Boris Johnson struggles to push the Brexit agreement through the British Parliament. For it can bite back! Who wins this battle? One could hope that gold, but this is not so certain

On Thursday, the breaking news came out that the EU and the UK reached agreement on Brexit. The agreement scrapped the Irish backstop that had formed the bulk of the opposition to the former proposals. Naive who believed that it would change something! We have to admit that we thought for a while that finally the Brexit saga was coming to an end.

But the British government still has a long way to go! On Saturday, the Parliament voted for a change to the sequencing of the ratification of the deal. It means that they withheld support on Johnsons Brexit deal until all the necessary legislation is passed. In this way, the lawmakers forced the prime minister to write a letter to the EU requesting a delay until January 31.

Poor Johnson! It must have been tough for him, as he said previously he would rather be dead in a ditch than ask for a delay. Yes, it must have been humiliating for him, as he broke his do or die pledge to leave on October 31. So being upset, Johnson sent a letter, but did not sign it! How clever! Only an Eton and Oxford graduate could come up with such a brilliant idea. He also included a second letter (signed!) that made it clear he did not agree with the first letter. He wrote a further extension would damage the interests of the UK and our EU partners, and the relationship between us. Have your cake and eat it too, anyone?

The EU has not yet given a clear response. Donald Tusk, the EU Council President, has said he has received Johnsons unsigned request and is consulting with EU leaders on how to react. However, the EU is unlikely to deny the extension request. After a short meeting on Sunday, the European diplomats decided to play for time and to wait to see how things will develop in London. And indeed, this might be very interesting.

On Monday, Johnson got some more bad news. The House of Commons speaker John Bercow refused to allow a vote on Johnsons Brexit deal. We are starting to love British politics its better than the best comedy drama!

Whats now? Yesterday, there was the first reading of the withdrawal agreement bill, which lays out the legal basis for UKs withdrawal under treaty with the EU. Today, the second reading, with the first vote, is taking place. The next phase will be crucial, as the MPs could then start adding amendments. They could, thus, spoil the legislation, postponing Brexit or even forcing Johnson to scrap the bill. For example, the MPs could add an amendment that keeps the UK within the EU customs union or that requires a second referendum. Johnson would be really happy then!

What does it all mean for the gold? Well, its hard to tell, as the Brexit saga is getting more and more complicated and everything is changing quickly. But there is a hint. The waves of Brexit optimism, triggered by the announced agreement between the EU and the UK government, pushed the U.S. dollar toward its worst month since January 2018. Meanwhile, the euro moved higher against greenback, but when the Brexit process was once again thrown into disarray on Monday, the U.S. dollar recovered some of the earlier losses, as the chart below shows. 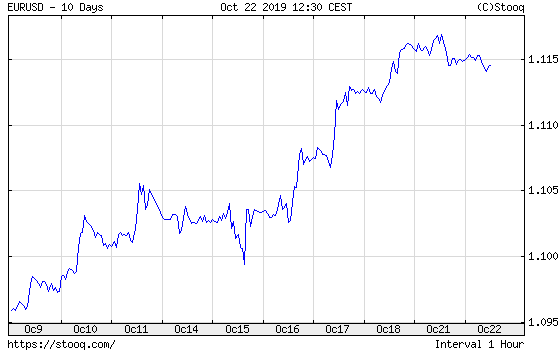 And what about gold? The yellow metal declined yesterday, as one can see in the chart below.

It may suggest that with the current market sentiment, gold is more sensitive to the developments in the foreign exchange market triggered by the Brexit drama that to the Brexit drama itself and the related uncertainty! Yes, gold is a safe-haven asset, but it is also a currency, sensitive to what is happening with other currencies! One thing is certain, though, the Brexit is far from over, and British politics may surprise us again!

If you enjoyed the above analysis, we invite you to check out our other services. We provide detailed fundamental analyses of the gold market in our monthly Gold Market Overview reports and we provide daily Gold & Silver Trading Alerts with clear buy and sell signals. If youre not ready to subscribe yet and are not on our gold mailing list yet, we urge you to sign up. Its free and if you dont like it, you can easily unsubscribe. Sign up today!

Disclaimer: Please note that the aim of the above analysis is to discuss the likely long-term impact of the featured phenomenon on the price of gold and this analysis does not indicate (nor does it aim to do so) whether gold is likely to move higher or lower in the short- or medium term. In order to determine the latter, many additional factors need to be considered (i.e. sentiment, chart patterns, cycles, indicators, ratios, self-similar patterns and more) and we are taking them into account (and discussing the short- and medium-term outlook) in our trading alerts.

All essays, research and information found above represent analyses and opinions of Przemyslaw Radomski, CFA and Sunshine Profits' associates only. As such, it may prove wrong and be a subject to change without notice. Opinions and analyses were based on data available to authors of respective essays at the time of writing. Although the information provided above is based on careful research and sources that are believed to be accurate, Przemyslaw Radomski, CFA and his associates do not guarantee the accuracy or thoroughness of the data or information reported. The opinions published above are neither an offer nor a recommendation to purchase or sell any securities. Mr. Radomski is not a Registered Securities Advisor. By reading Przemyslaw Radomski's, CFA reports you fully agree that he will not be held responsible or liable for any decisions you make regarding any information provided in these reports. Investing, trading and speculation in any financial markets may involve high risk of loss. Przemyslaw Radomski, CFA, Sunshine Profits' employees and affiliates as well as members of their families may have a short or long position in any securities, including those mentioned in any of the reports or essays, and may make additional purchases and/or sales of those securities without notice.